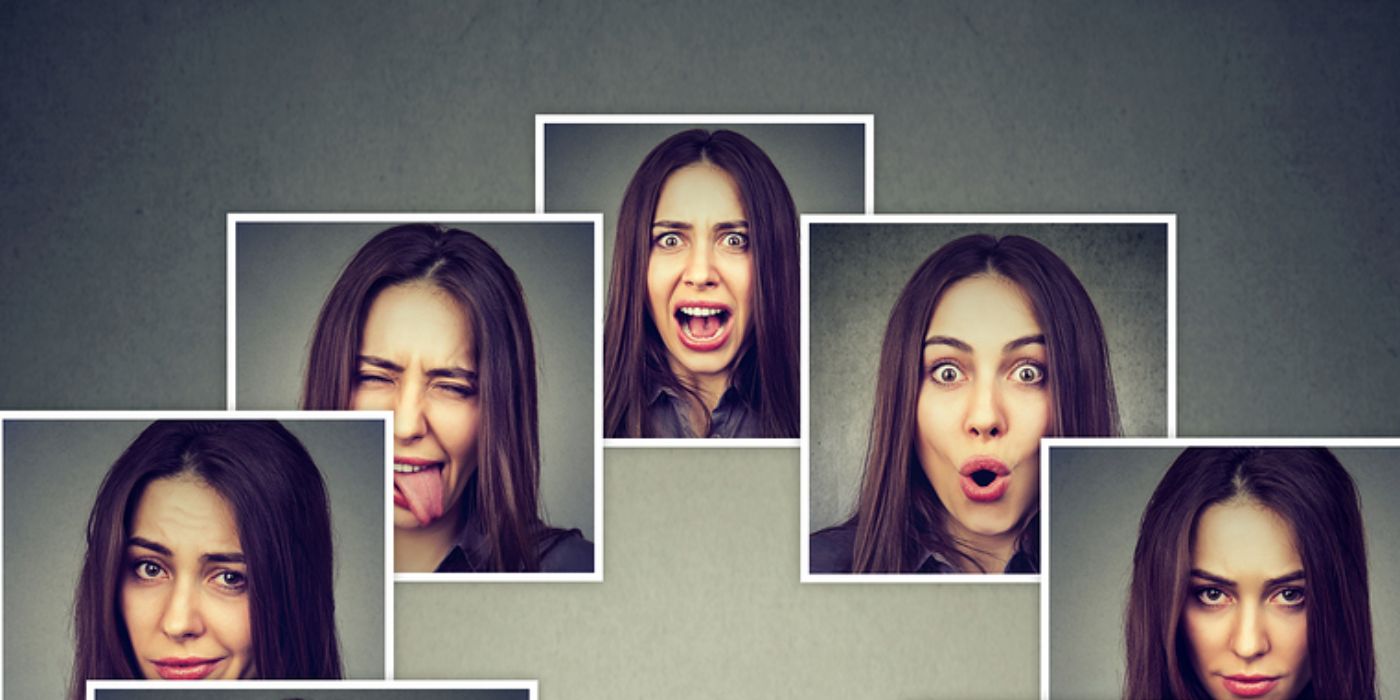 Let's face it: there is nothing sexy about flying off the handle. As submissives, we are used to a certain degree of control in our lives. But how much of that is exerted over our emotions? Do we give ourselves credit for the amount of power we have to improve ourselves by exercising moderation in the emotions we express and the urges we act on? Could we make emotional moderation a tenet of our daily lives? We can, and here's the tip that will help:

**We always have the choice of which emotion we give credence. We also have a choice about the extent to which we act out our emotions. **

It should go without saying that there is a difference between a reaction and an emotion. An initial response might be a flush of adrenaline, stunned awe, a flash of instinctive possessiveness—you get the idea. Reactions are short-lived immediate responses. But emotions are something different; they are long-lasting and often self-perpetuated. Emotions are linked to your thoughts, feelings, and behaviors.

Dr. Jill Bolte Taylor is a neuroanatomist who, in her book " My Stroke of Insight," has stated on the topic of reaction versus emotion that, "When a person has a reaction to something in their environment, there's a 90-second chemical process that happens in the body; after that, any remaining emotional response is just the person choosing to stay in that emotional loop." Therefore, if you can't tell the difference between a reaction and an emotion, a good rule of thumb to use is the 90-second rule: if it lasts 90 seconds or less, it's a reaction; if you feel it linger past 90 seconds, it's an emotion. The good news is, those emotions which stem from reactions can be altered.

To draw up an example, let's say you're going out with your dominant to a play party, and you're driving on a multilane highway to get there. While on the road, a recklessly driving person cuts you off, leaving you little time to brake. That's going to catch you off guard. You'll probably have a physiologic reaction—a fight or flight response—an increase in blood pressure, a higher heart rate, flushing, perspiration—the whole nine yards. An emotional reaction of fear, anger, or shock, may result as well.

But let's say you brake in time, everyone is safe, and you catch your breath. You and your dominant get to the play party in one piece. Everything is copacetic. Fast forward—by now, it has been two days since the incident. If you're still upset, it's because you have perpetuated and rehashed the feeling of that reaction over and over—so much so that you still feel it.

Reactions don't last, but emotions can linger. So, you've turned it into emotion by echoing that initial reaction to yourself enough to keep it around and continue indulging in it. Remember: if you fuel it, you'll feel it. It's common to do this without even realizing that you're doing it.

So, you decided something happened, and "it made you angry." (I don't like saying "it made me angry" because it shifts responsibility for my emotions away from me. For me, I prefer to say, "I allowed myself to become angry.") You keep thinking about this needless emotion, which isn't helping you in any way (that is, there is no immediate threat the anger is protecting you from, and it's not making your day better to be angry). You are just keeping this feeling around, and it's making you feel like less than your best self. It doesn't have to be like that. I've often heard the phrase, "I can't help how I feel." To this, I'd argue, "Well, actually, you can."

First, we don't have to dwell. We don't have to torture ourselves by replaying unpleasant scenarios in our heads. Over time, doing so just compounds the emotion and makes it harder to cope. It almost becomes a habit that can be difficult to unlearn.

Second, most of us don't go around feeling just one emotion at a time or all the time, and because of that, we have a variety of feelings we can choose. We often seem to select the predominant emotion, or the easy one, because we tell ourselves it's not a conscious choice—but it could be, if we were mindful about it.

If we practiced paying attention to and pulling apart our emotions, we could choose which emotion to invest in. Most of us already do this to some extent. Have you ever been super sad, but had to put on a happy face to attend an event? So, you smile and laugh. You go through the motions while feeling like you're dying inside—mostly to save face. Frequently, something changes partway through your experience. You end up inadvertently softening some of that sadness. By the end of it, you feel somewhat better about things.

It only makes sense—you were smiling, which tells your body and mind you're happy. Then you start to believe it, just a little, without realizing it, which makes you smile more. It is like a feedback loop between your body and mind.

If you can "fake it" long enough, by the end of your time there, the sadness somehow doesn't seem as bad. It's not gone, but it has shifted to the backburner. You made a conscious decision to outwardly express a different emotion (even though it was artificial), and it changed some of your inward emotions.

Imagine that phenomenon as the flip-side of emotional manipulation. Instead of tricking someone else into feeling something to their detriment, you're duping your own brain and body into feeling something to your benefit. If we just chose to do that more often—mindfully and not because we felt forced, but because we wanted to feel a certain way—we could rise above our usual inclinations. We can control our emotions. If we practiced enough, it would become just another life skill at our disposal.

I like to experiment with myself emotionally. It sounds mad-scientist adjacent; I know. But I won't write about experiences I don't know anything about. Anyway, one instance of my self-experimentation took place after a close acquaintance of mine did something she knew would hurt me. We had talked about it previously and she was clear on where I stood about the issue. She knew she had crossed a line, but decided not to tell me because (she figured) it would be a while before I found out. She didn't consider the likelihood of another person filling me in.

My immediate reaction was simultaneous heart-thumping anger and crushing sadness. I immediately thought of calling her. My blood was pumping, and I was…not at my best. But I thought, just for a moment, "What if I didn't? What if I waited to have this discussion until my emotions were level and I could think more clearly?" So, I put my phone away. I rode out the reaction, took some breaths, and didn't ruin the rest of my night.

You would be surprised how well you can compose yourself in just a few minutes if you focus on what you need to feel better right then (water, food, someone to talk to, etc.). I ended up having an enjoyable evening and was glad I decided to experiment. I'm still not thrilled about what she did, but I was able to later talk about it reasonably with her, without embarrassing myself and without saying or doing something regrettable. I was able to handle the situation following the behavior that is expected of me.

Many submissives have a code their dominants expect them to live up to. We often are expected to possess or maintain a pleasant demeanor. If we let our reactions and emotions go unchecked, it can become tough for us to achieve that, which is why emotional moderation can be so helpful.

In this instance, I chose not to let my reaction become an action. I waited out the rush of feeling and imposed a break in the flow from reaction to action. I tamped down my urge to act. I found the urge to act becomes less "urgent" when you recognize that you can wait. It becomes more manageable when you accept that not everything warrants an immediate response.

Obviously, waiting out the reaction isn't the most straightforward task to accomplish, especially when your emotions are running high. But, doing so is possible. Furthermore, knowing that the possibility to do so exists can change your perspective on emotional control.

We also can choose how often we let our emotions get away from us. Some emotions can hurt us if we allow them to run wild, but others are perfectly safe to feel (most of the time). We can decide for ourselves, "Right now is an inopportune time to feel this degree of sadness," for example. Conversely, we can say to ourselves, "I feel safe enough to explore unbridled joy right now," and see where it takes us.

We choose how we manage our emotions, but it all starts with becoming mindful of the emotions that come and go. If we can realize the emotions are separate from us, that we exist whether or not the emotions are there, we already have a leg up. We can watch the feelings as an observer, as something separate, not consumed by the feelings washing through us.

After enough practice of watching these feelings come and go, we can recognize that every one of them is not a call to action. Most aren't. Then, we can become selective about our feelings.

We can pretend our minds are our gardens. We can weed out all the unwelcome thoughts and emotions. When one pops up that you know shouldn't be there, pluck it out by the roots and toss it away!

Your mind is your garden. What will you grow? Hopefully, you'll cultivate a mind you enjoy spending time in, and one that is nurturing for you.

As submissives, we are expected to express a modicum of restraint, most often in regards to our words and actions. Frequently, we do this to align ourselves with the expectations of the dominants who care for us. I propose that while it is admirable to used restraint and moderation in our words and actions, it is even more important to exercise moderation in our thoughts and feelings.

No one can hold anything in forever. What is inside always comes out. Using emotional moderation in our submission is a way of tidying up our mind-space so we can be less preoccupied and more available to experience our submission, our dynamics, and everything they have to offer.

As an Amazon Associate, I earn from qualifying purchases. I get commissions for purchases made through links in this post.

7 Myths of Grieving and Understanding Your Responses to Death